Preserving the Past is a blog about just that. Clarence Simonsen has been researching a lot about the past especially about World War Two for close to 50 years.

This blog offers him the opportunity to share his views about what history often neglected.

Another story from Clarence Simonsen

“My Gal Sal” and Global Warming

President Franklin D. Roosevelt was a man of great change and foresaw the United States being drawn into the war in Europe long before 7 December 1941. The President knew the aeroplane would play an enormous part in winning such a world war and made plans for expansion of the Army Air Corps. On 20 June 1941, the United States Army Air Force was created which combined all air elements under one control. Next, the Roosevelt administration began to plan for the possibility of American involvement in the war, with Britain as their main ally. When the Axis powers declared war on the United States in December 1941, the American air forces would now join the R.A.F. in a day and night offensive to weaken the German military power. But first, they must get the new B-17E Flying Fortress bombers to England. 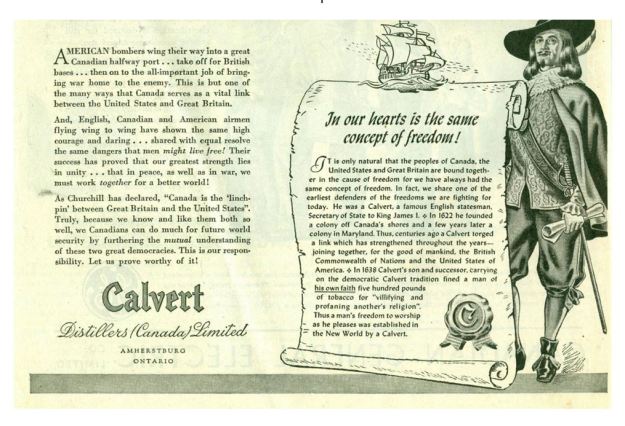 This 1943 Canadian Calvert Distillers ad informs and displays the delivery of the new B-17 “Flying Fortress” to the Mighty 8th Air Force in England, using the RCAF base at Goose Bay, Labrador, as the halfway port for aircraft delivery.

This image from National Film Board of Canada by Ronny Jaques was in fact taken in early April 1943, when the B-17F Air Echelon of the 8th Air Force, 96th bomb Group were departing Goose Bay, for Greenland and on to England.

In August of 1941, when President Roosevelt and P.M. Churchill met, [on the U.S.S. Augusta] the President informed him, should America become involved in the war in Europe, he would fly American aircraft to Britain. A Canadian search for a new base in Labrador now became part of these most secret plans.

Goose: Key Air Base, was the first article to inform the Canadian public of the huge RCAF airbase constructed in the wilderness of Labrador, built in a record time by engineers of the Department of Transport and the McNamara Construction Company from Leaside, Ontario. The plateau was discovered from the air by Eric Fry of the Canadian Department of Lands and Forests in July 1941. The first Canadian ice-breaker “McLean” arrived in late September 1941, loaded with bulldozers, steam shovels, cranes, and 75,000 tons of construction material. The winter runways were serviceable on 21 November and the first aircraft landed on 9 December 1941, the day after the U.S. declared war on Japan. The wise plans of P.M. Churchill and P.M. Mackenzie King had proven to be correct and now the Americans would move to Goose Bay. The three triangle paved runways were completed in early June 1942, each 6,000 feet long by 200 feet wide and the base could receive aircraft from any direction. The first American B-17E bombers would touch down 16:25 hrs., 26 June 1942. Command is under one RCAF Group Captain, one RAF Ferry Command Squadron Leader and on the American side, United States Army Transport Command of Colonel A. D. Smith. The base cost of 15 million was shared by the United States and Canada, but the base belongs to Newfoundland. The base is part of a three-way lease agreement between Canada, U.S., and Britain, as Newfoundland was still under British administration and not a province of Canada. Total protection is under control of the Canadian Army [New Brunswick Rangers] who supply ground and air defense of the complete base, including the American side. 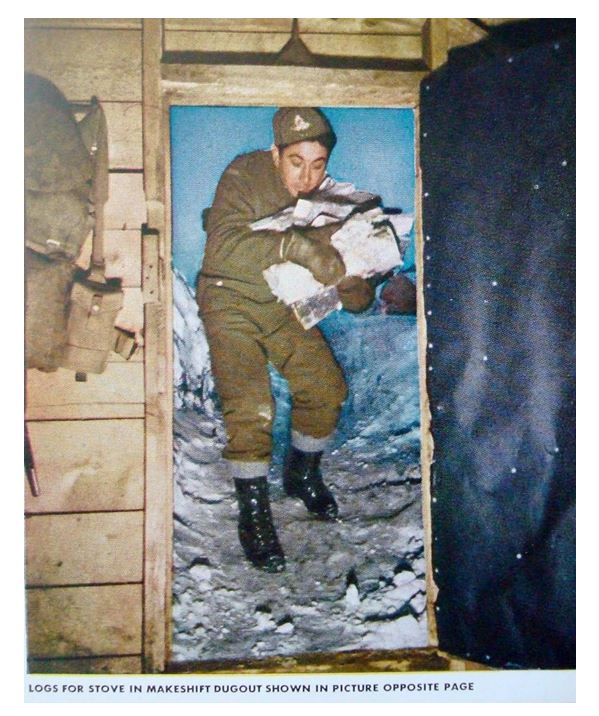 The New Brunswick Rangers living quarters at Goose Bay in 1942

With the outbreak of World War in Europe in September 1939, the Roosevelt administration realized the sudden urgent need to increase American air defense. This would have a major effect on the Boeing B-17 expansion program which resulted in the extensive redesign of the new B-17E. While I have some fifty books on the B-17, and I would strongly suggest the best to read and learn is the 1976 publication by Peter M. Bowers, Fortress in the Sky. Another collector’s book is the 1943 publication by Thomas Collison, simply titled Flying Fortress, which contains the outline of the new B-17E tail on the cover.

The above page is taken from that early book.

The new B-17E featured all new gun turrets, a major redesign of the rear fuselage, and larger horizontal stabilizer, with an entirely new rudder and dorsal fin, [above right]. This has been covered time and time again in many publications, however the B-17E became the first American strategic bomber, able to attack an enemy target and defend itself from attack in the air. The B-17E Boeing serial numbers 41-9011 to 41-9245 cost $302,722.00 each to build. They would now go to war against Hitler over the skies of Europe.

The planning for the first movement of units of the Eighth Air Force to England were organized and prepared by the Eighth Fighter Command Headquarters at Grenier Field, New Hampshire. These orders were then given to the Air Transport Command, North Atlantic Division and prepared for the final briefing. The northern route chosen had final American departure from Presque Isle, Maine, then Goose Bay, Labrador, Bluie West One in Greenland, then on to Reykjavik, Iceland and arrival at Prestwick in Scotland.

The first American heavy bombardment group of the 8th Air Force, activated on 3 February 1942, and made combat ready in May, was the 97th Bomb Group. They received new B-17E aircraft for training and were the first and only group assigned to fly B-17E’s across the Atlantic to England. The detailed crossing of this first flight is covered in two recommended books – 1970 publication by Roger Freeman, The Mighty Eighth and 1986 book by Cliff T. Bishop, titled Fortress of the Big Triangle First.

In short, fifteen B-17E aircraft arrived at Goose Bay, Labrador, after 16:00 hrs. 26 June 1942. They refuelled and departed just after 20:00 hrs. Their next stop would be Bluie West 1, Greenland, 765 miles north-east of Labrador coast line. When they arrived, at 2:40 am, the visibility prevented landing, and they must return to Goose Bay, or attempt to land at Bluie West 8, another 400 miles on the east coast of Greenland. Eleven B-17s returned to Goose Bay, one landed at Bluie West 8, and the remaining three aircraft, lost and running out of fuel, were forced to crash land on the Greenland coast.

B-17E serial 41-9032 made a successful landing on the ice-cap and the crew were saved by “Blue Nose” Col. Bernt Balchen, which is well detailed in many books and on the Internet. 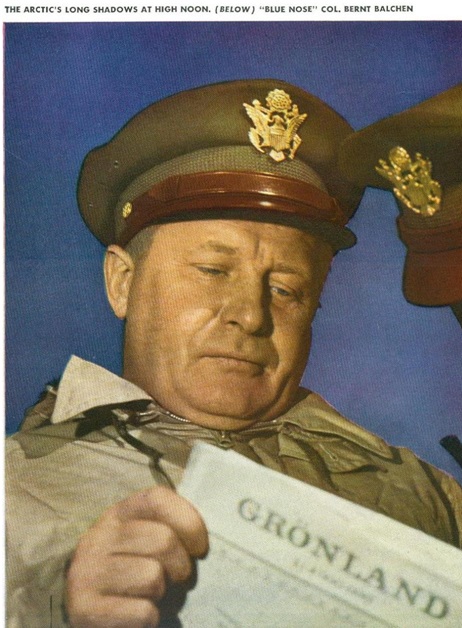 Col. Balchen was the supervisor who constructed the airbase named Bluie West 8, an expert in arctic survival, Norwegian pilot, and member of the famed Byrd Antarctic expedition.

Pilot Lt. Ralf Stinson and crew ditched “My Gal Sal” on the Greenland icecap at Latitude 65.21’N, longitude 45.53′ W, on 27 June 1942. The rescue of this crew from the icecap would become a 10-day ordeal, which again is covered in books and the internet. The crew returned to the United States and the B-17E was forgotten.

In 1964, the B-17E was discovered by a U.S.A.F. reconnaissance aircraft and recorded on film in fairly good condition. The tail had been broken off by the movement of ice and possibly by the high winds during winter months. In 1965, the Society of Automotive Engineers sent a team to the crash site by helicopter, to gather samples of hydraulic fluid, rubber, canvas, Plexiglas, navigational and aircrew items. These items were tested for long-term effects by cold and today are on public display at the Wright Patterson Air Force Museum.

“My Gal Sal” is again forgotten for the next thirty years. In 1995, renowned aircraft salvager Gary Larkins receives permission from the Danish Government to save the oldest B-17E in the world. The operation begins in July 1995, and a Canadian Helicopter crew is hired to haul the dismantled bomber to a Greenland seaport. The following photos were taken by a helicopter crewmember, but his name is not known. They were obtained from Richard de Boer of the Aero Space Museum Association of Calgary in 1998. 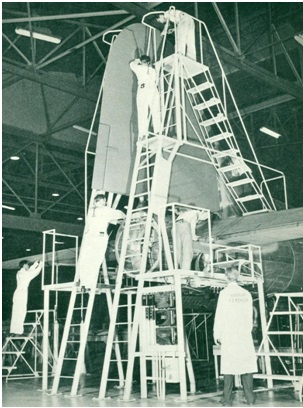 The vertical fin and horizontal tail being attached to a B-17E in the Boeing plant,
early 1942

The B-17E rear fuselage was redesigned, strengthened, and built as one unit, then bolted to the front fuselage, March 1942. This is the area that fractured [above] on the Greenland icecap, some date before 1964. 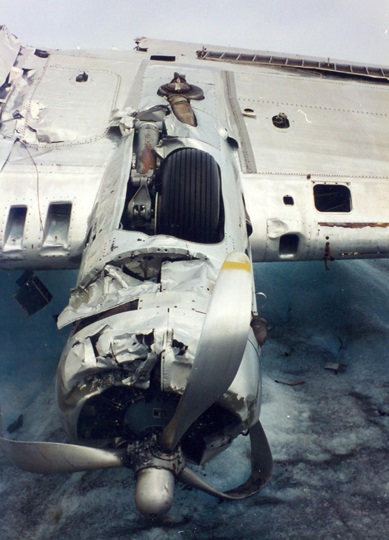 The new designed tail gun of the B-17E with ring and bead gun sight. This was also a separate built structure by Boeing and then bolted to the rear fuselage.

This broke from the fuselage of “My Gal Sal” and was blown the furthest from the crash site. 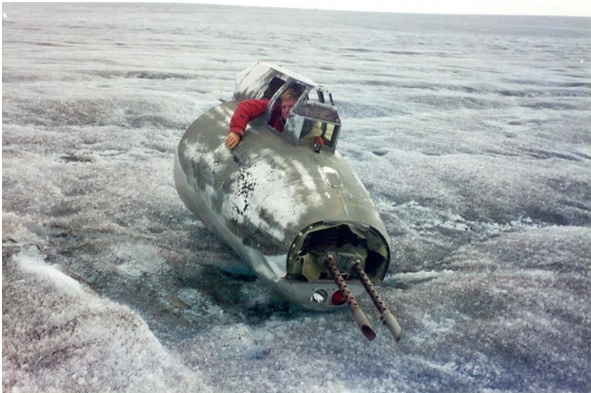 This amazing photo taken in July 1995, shows the impact of the treacherous arctic winds in the harsh environment of Greenland. It also records the harsh effects of sudden “Global Warming.”

In 1965, B-17E “My Gal Sal” was sitting on flat glacier ice where she crash landed 27 June 1942. In the next thirty years, the ice around the B-17E begins to melt, and by 1995 the bomber is sitting 30 feet in the air on a huge ice pedestal. The shade of the bomber prevents the ice from melting under her outline in the hot summer sun. One winter night, the savage winds flip the bomber off her ice pedestal and the contents of the bomber are blown across the Greenland icecap. These American aircrew boots, WWII helmets, and other items will be collected and saved by the salvage crew.

In four weeks the B-17E is dismantled and flown by helicopter to a Greenland dock, placed in containers, and shipped by cargo ship to the United States. On 1 October 1995, it arrives at Norfolk, VA, where the containers are broken into and most of the aircrew items are stolen.

The B-17E is next trucked to Tillamook, Oregon, where the bomber sits in storage for five years. On 14 March 2000, it is sold to Bob Ready, of Cincinnati, Ohio. The restoration begins and today this rare part of early American WWII history is the centerpiece of the U.S. Freedom Pavilion, the Boeing Center, at the National WWII Museum in New Orleans, Louisiana. 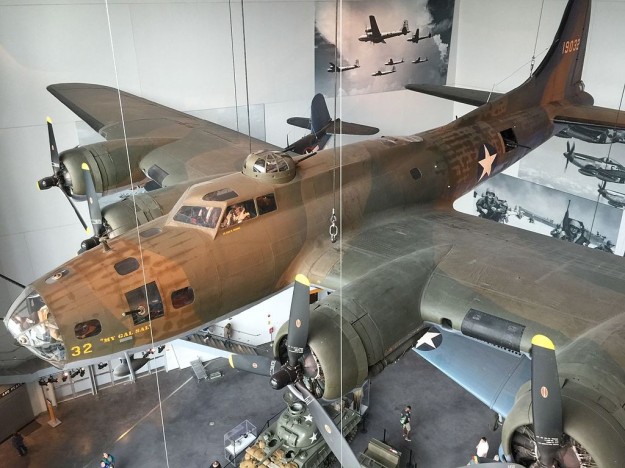 In the next fifty years, global warming will expose hundreds of WWII aircraft that crashed on Greenland, and some still contain the frozen bodies of the aircrew.

We can save and preserve “My Gal Sal”, but can we save “Our Gal Planet Earth” from Global Warming?

3 thoughts on ““My Gal Sal” and Global Warming”