The German name “Aggregat” means a group of machines operating together and was possibly used as early as 1930, by members of the [Raketenflugplatz] Rocket Flight Berlin. Eighteen year old von Braun joined this group of 50 members who conducted in-depth research on rocketry.

In May 1931 the group successfully launch the first Aggregat/1 which is named – “Repulsor.”

This is the first naming of a German rocket and it is possible von Braun was involved in the name selection.

On 1 October 1932, twenty-one year old Wernher von Braun became a civilian employee of the Reichswehr, [German Army Ordnance Rocket Department] conducting testing at the German artillery range at Kummersdorf, Luckenwalde, 25 miles south of Berlin. The A/1 rocket was used only for static testing and by 17 December 1934 the group had constructed a test flight model called Aggregat-2 [A/2].

Two A/2 rockets were successfully launched from the Island of Borkum in the North Sea, and they are given the names “Max and Moritz”, after the famous Wilhelm Busch mischievous German comic strip characters. I cannot find any evidence von Braun named the two rockets, however I’m positive he was included and observed the power of naming the first new missiles.

In 1897, German immigrant Rudolph Dirks created an American comic strip based on the adventures of Max and Mortiz, naming it the “Katzenjammer Kids.” The twin sons of Mamma Katzenjammer were named Hans and Fritz and this strip still survives in newspapers and comics today. They became a large part of American and Canadian aircraft nose art during WWII.

In March 1936, the Commander-in-Chief of the German Army, Generalobest Werner von Fritsch, was so impressed with new rocket demonstrations; he approved the request for funding to continue the program. Plans were now made to construct a new Aggregat-4 [A/4].

The testing for the new A/4 rocket design was first conducted using the A/3 rockets and a new German letter and number was introduced for each test firing flight. V for Versuchsmuster [test model] was give to each flight with a number beginning with #1. The first test flight of an A/3 rocket was V1 on 4 December 1937, which was patriotically named “Deutschland” by Wernher von Braun. Three tests follow V2 on 6 December, V3 on 8 December and V4 on 11 December 1937. All of the four test rockets crashed and it is soon realized a new designed model rocket would have to be constructed for future A/4 testing. Due to the fact the designation A/4 had been reserved for the future Army military rocket, the next designation Aggregat-5 [A/5] was given to the new test rocket. No evidence can be found that any of these test rockets were given a name or art work.

In the next two years 29 of the A/5 test rockets were fired from the small Island of Greifswalder Oie, in the Baltic Sea. Many of these rockets were recovered and used again and again in the test flights. The A/5 became the workhorse of the German research and development program which led to the new A/4 rocket design.

During this A/5 testing it was realized the new A/4 rocket required a secret testing site with large assembly buildings and proving ground, which was located in March 1936. The German Army Experimental Station at Peenemunde received twenty million Reich marks and by April 1937 the rocket scientists began moving from Kummersdorf to Peenemunde. After seven years of basic rocket testing the German scientists were prepared for development, assemble, and test firing of the new Aggregat-4 rocket at Peenemunde. In following the earlier naming of each of the first launches of missiles A/1, A/2, and A/3 rockets, I’m positive the first launch of A/4 on 23 March 1943, contained a name or first use of a tail art painting?

Gerd de Beek was involved in the early technical design [beginning in 1937] which produced the new A/4 on blueprint paper which was classified top secret. Little is known about the early history of this artist, who was a draftsman, technical illustrator, combined with an oil paint mural artist, who was also believed to have decorated the building walls at Peenemunde. [NASA Historian Mike Wright recorded in his booklet on the von Braun celebration of the Arts and Science – “de Beek was among those who moved to Fort Bliss 1946, and decorated a portion of the military post set aside for the Germans with his own paintings.” His main function at Peenemunde was producing the rocket cutaway drawings, for his friend and boss von Braun and his talent somehow evolved into sketching and painting a rare German pre-launch A/4 rocket tail art. I believe he painted at least 40 art images but only 38 can be confirmed from photos.

The first A/4 rocket was handmade and taken to Prufstand VII, [test stand VII] at Peenemunde on 18 March 1942. No launch was planned and no launch number was assigned. This was the very early trial and error period for the new rocket scientists and hundreds of black and white photos are taken of each procedure and test. The first production A/4 is taken to the test stand tower on 23 March 1942 for full scale static testing. This test is given the V for Versuchsmuster [test model] and the number V1. On 13 June, this same rocket is taken to Peenemunde P7 for the very first test launch and this is given the number V2. This is the first confirmed use of a tail art image painted by Gerd de Beek, featuring the full front face of a German female. The launch is a failure with explosion 36 seconds and 1.3 km down range.

The German scientists in Peenemunde create a series of photo albums which record all the technical rocket information plus the tail art image of each launch. These albums will be officially name “HAP-11 BILD archive albums on 1 June 1943 and grow to over 1,400 pages with over 5,000 black and white photo images. [This will be covered in more detail later]

This is a public domain photo released by the German Federal archives showing the view at Peenemunde in possibly 1938 and Test Stand #1, used for A/4 rocket testing before launch. This original photo appeared in the HAP-11 photo albums, came to American with von Braun and his scientists in 1945. Copied on microfilm at Fort Eustis in 1946, it was part of the NASA Historic Building Survey archives and is now released in America as public domain.

This third A/4 launch attempt takes place on 16 August 1942, and the Gerd de Beek tail art included the “V-3”, for Versuchsmuster. This test fight is a failure when the nose section broke off and rocket was destroyed, range 8 km. The witch tail art painted by Gerd de Beek survived for only 45 seconds, but this WWII photo record still survives in Munich, Germany, today. After 194 seconds of flight, the rocket broke apart in midair, however it was the first German space vehicle to break the sound barrier. This rocket art was painted in oil based paint on the rocket skin which was also oil based paint. The rocket sections fell into the Baltic after covering 0.81 miles, and today this original art could still remain on the seabed of the Baltic. 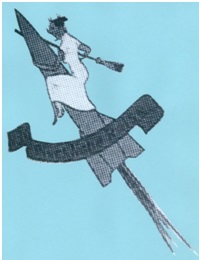 These test firings continue in order of V launch number from V4 on 3 October 1942 to V13 launched on 19 February 1943. From this date on the test A/4 rockets are not fired in any order and many are missing and never fired. V18 is launched on 18 March 1943, V17 is fired on 3 April 1943, and V20 is fired on 14 April 1943.
Until the 17 August 1943, raid by the RAF, forty-one A/4 rockets have been manufactured at Peenemunde and 33 have been test fired. Photos record 32 of these test rockets received German tail art painted by Gerd de Beek, and it is all recorded on 35 mm black and white film and placed in the archive research photo albums. In fact de Beek completed a total of 38 [photo image recorded] rocket tail art images at Peenemunde and this is the history of his lost art. It is unknown if V24 contained tail art, but I’m sure it did, and I believe one other rocket was painted by de Beek, which would bring his total to 40 rocket tail art images.
V32 was painted in early June 1943, however possibly due to mechanical problems it was not launched until 7 January 1944. 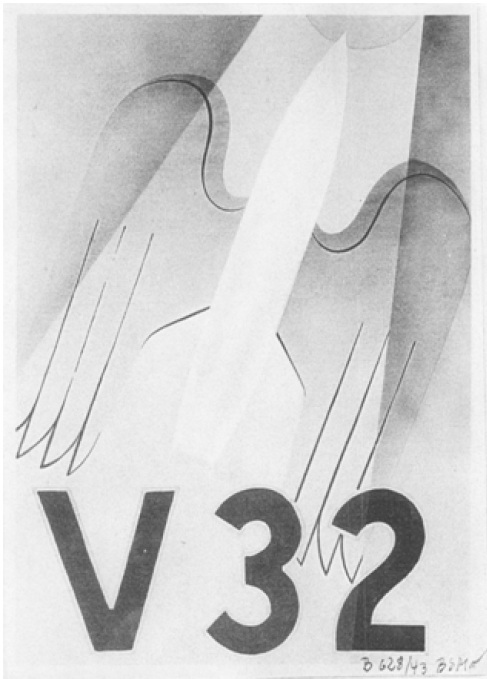 Artwork was completed for V39, V47, and V50 but no launch took place as it is believed they were lost in the RAF attack on 17/18 August 1943. Rocket V54 was launched without tail art due to the fact no art had been completed by de Beek. [This will be covered in full detail in Chapter Eight]

All of de Beek’s original oil colour painted A/4 rocket tail art was destroyed seconds after launch and no color images are known to exist. The flight duration for a good test averaged around 300 seconds, the longest being [V30] 318 seconds, range 287 k/m, 24 June 1943.

Black and White 35 mm German Peenemunde photo images are contained in the original HAP-11 photo albums in Munich, Germany, however they are impossible to obtain and some Peenemunde images are in fact missing. Microfilm American duplicate images can be found in NASA free domain images, U.S. National Archives and Records Administration, and the U.S. Space and Rocket Center at Huntsville, Alabama. It soon becomes clear the Peenemunde 35 mm images have been broken up, and widely scattered from one institution to another. Other rare images are still hidden in the New Mexico Museum of Space History, and requests to the Deputy Director, Mr. Kent Allen, received no reply. One person assisted me to obtain all these lost images and wishes to remain nameless.

These powerful American institutions have known about the WWII Peenemunde tail art since 1946, and even today the Smithsonian fails to properly educate its visitors and patrons to the historical place this Peenemunde art played in American Space history. It is all about the question – Was this German Peenemunde Space Art of Nazi Missile Art? This American created debate on what to display in a museum setting and what to tell American main-stream society has totally destroyed the history and art created by the world’s first rocket space artist, Gerd de Beek.

Artwork was completed for V39, V47, and V50 but no launch took place as it is believed they were lost in the RAF attack on 17/18 August 1943. Rocket V54 was launched without tail art due to the fact no art had been completed by de Beek.

The last tail art completed in full color by Gerd de Beek was V47, but it was never launched. This rocket clearly shows the rise in power of the Peenemunde team in mid-July 1943. It also shows the power of the Third Reich Eagle who prepares to fly off into space.

I believe Gerd de Beek completed this art just days before the RAF bombing on 17/18 August 1943 of the Peenemunde assembly buildings. 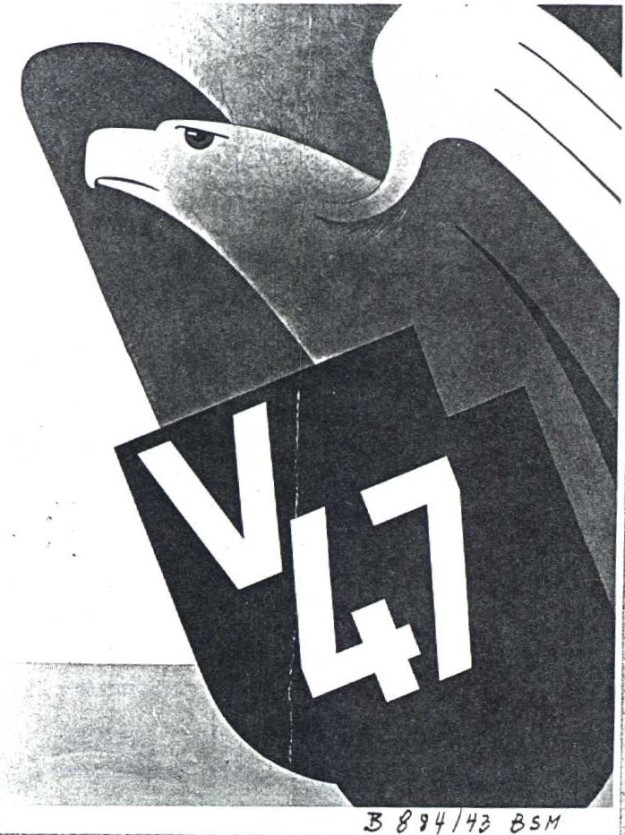 During the RAF attack the rocket is either destroyed or damaged beyond repair. This is another image the American Government did not want released in the post-war Soviet Space race era.

[This will be covered in full detail in Chapter Eight]