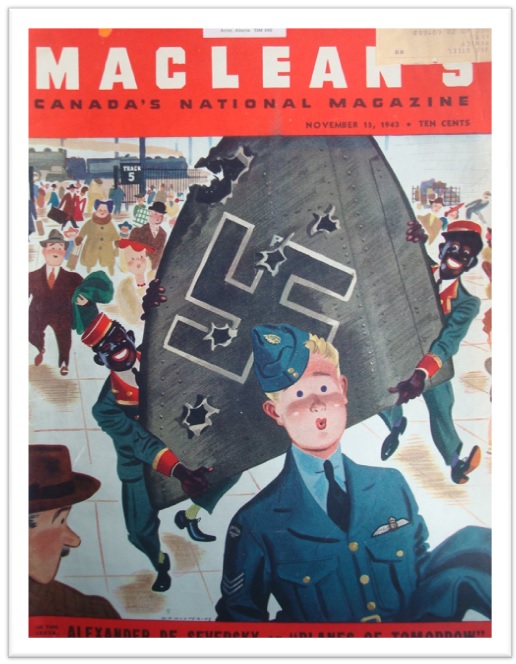 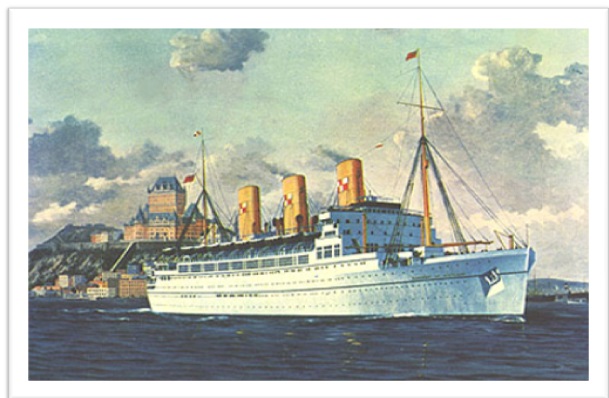 Canadian Pacific poster showing the S.S. Empress of Scotland leaving Quebec City.
Gordon Hill recalls he sailed for Glasgow, [Greenook] Scotland, on the Canadian Pacific Steamship Lines S.S. Empress of Scotland. He was in Draft E.870, with 340 Officers, 642 Sergeants, and 675 other ranks. He said the funny part was all the direction markings of the ship interior were in Japanese, with no English.

Originally constructed in 1930, for Canadian Steamship Lines, it was named the “Empress of Japan” and sailed from Vancouver to Yokohama, to Hong Kong and then returned same route to Vancouver. That’s why the ship lettering was all in Japanese. With the attack on Pearl Harbor the name was changed to “Empress of Scotland” and she would make twelve return trips, taking troops to the war in Europe, and returning RAF cadets for pilot training in Canada. The major shipping ports were Halifax, Nova Scotia, and New York City, New York.

Draft E.870 left Halifax, Nova Scotia, on 17 June 44, and sailed 3,098 miles to dock at Greenook, Scotland, [25 miles west of Glasgow] on 23 June. The pilots then boarded a train and travelled south to RAF Station Innsworth, which was located N-E of RAF Personnel and Training Command at Gloucester. RAF Innsworth was a non-flying station, associated with the Women’s branch of the service, and some 4,000 females were on strength. Gordon said the Canadians had no idea, and never saw any British WAAF.
The RCAF pilots Gordon can remember were Doug Douglas, Terry Watt, Mac Donald, Scotty Galbraith, Digger Harrison, Vic Legear, Don Campbell, Keith Lyle, Gus Gaskin, John Cordick, Deke Passmore and Reilly Jackson. They all spent one week in London, drinking, before they assumed training. Gordon was not a drinker, and kept control of the group, when they tipped a few too many. 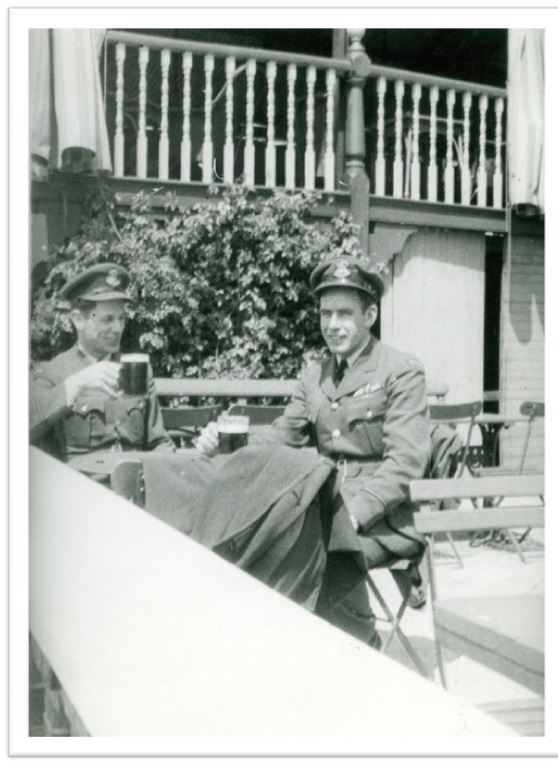 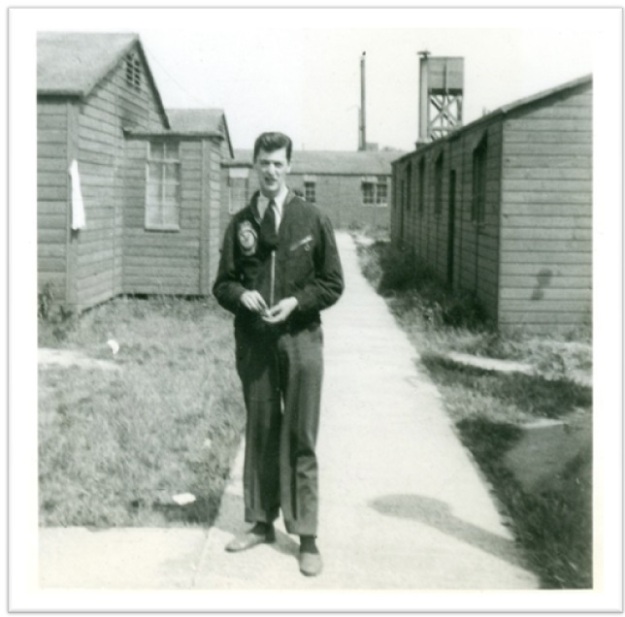 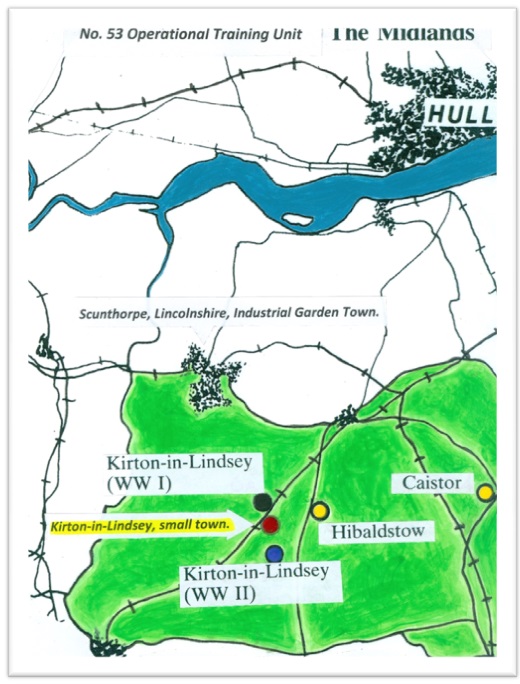 On 15 May 1940, a new airfield was constructed just a few miles south of the original location, used by Fighter Command RAF Station covering Northeast England. The early Operations Records Book used the name Kirton Lindsey, and that remained until July 1941, when the title Kirton-in-Lindsey begins to appear.

No. 53 Operational Training Unit was formed on 18 February 1941, at RAF Heston, under control of No. 81 Group, for the purpose of training Spitfire pilots for Fighter Command. The three original flights were separated in June 1941, and two remained at Heston, forming the basis of No. 61 O.T.U. In April 1943, control was transferred to No. 9 Group, Fighter Command, and they were re-located to RAF Kirton-in-Lindsey on 9 May 1943. The first Spitfire pilot course conducted at Kirton-in-Lindsey was No. 46 which began on 23 May 1944.

R.A.F. Kirton-in-Lindsey and the village [top left] with same name.

The RAF base had three British Type “C” aircraft hangars, four blister aircraft hangars, Sergeant and Officers Mess, technical buildings, and accommodation for married quarters. It also had an Officers tennis court, where Gordon spent many hours. The airfield had some early Fighter Command history, as this was where No. 71 RAF Squadron of American volunteers, “Eagle Squadron” trained and flew from November 41 to April 1942. The Canadian pilots arrived on 4 July 1944, were assigned quarters and a British RAF bicycle for transportation. The largest town in the area was Scunthorpe, which was seven miles Northwest of the airfield.

Gordon on the RAF bikes. 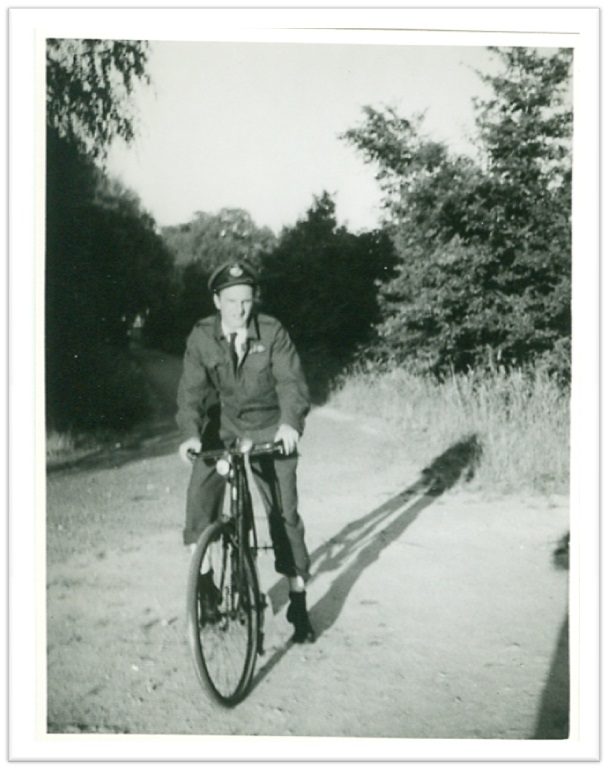 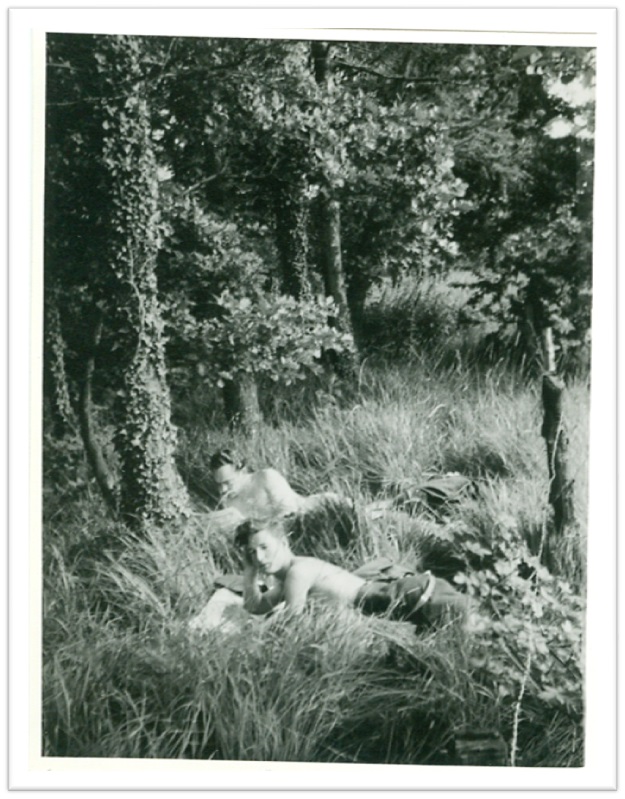 A large number of squadrons used this airfield and this is No. 65 Squadron, which shows the grass landing area looking south from the hangars. 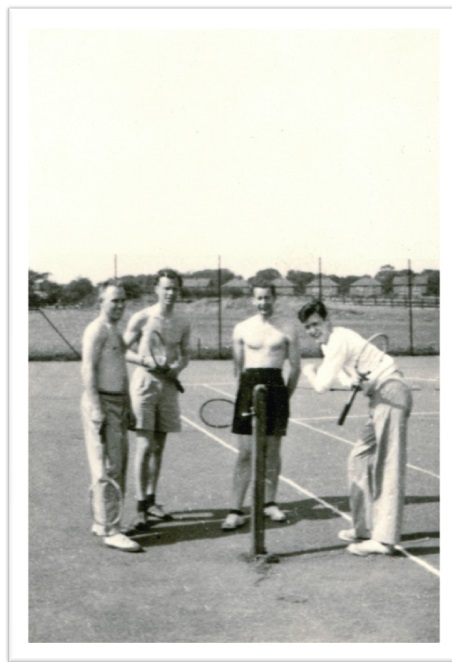 There was spare time for playing tennis. The other pilots were all RCAF, however Gordon cannot recall their names. 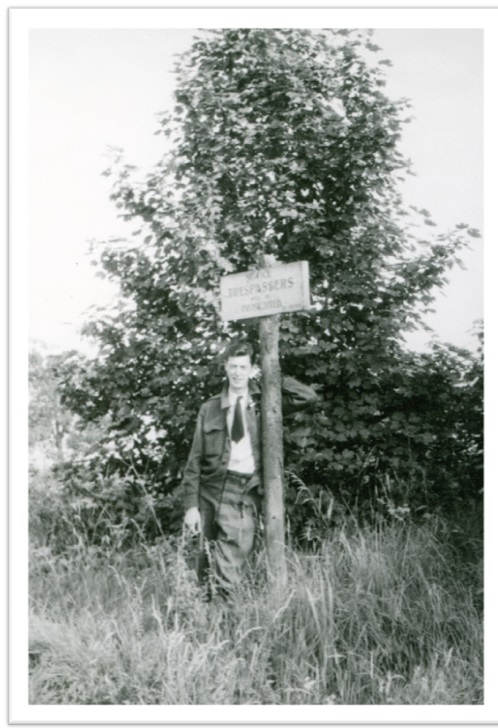 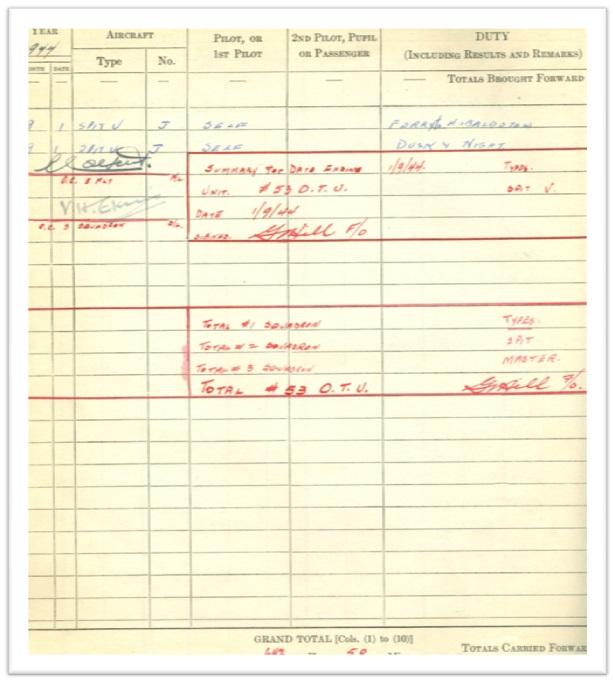 The next posting was No. 83 Group Support Unit [G.S.U.] located at Bognor Regis on the southern coast of England, P/O Hill arrived on 7 September. These Group Support Units were formed in February 1944, and were holding units for aircraft and pilots of two Groups in 2nd Tactical Air Force. They maintained around 90 aircraft of different types, ready for issue to squadrons to replace losses. Gordon spent eight days living in tents at this station, then posted for more fighter pilot Spitfire air-firing at No. 13 P.T.U. at Warmwell, on 19 to 27 September 44. 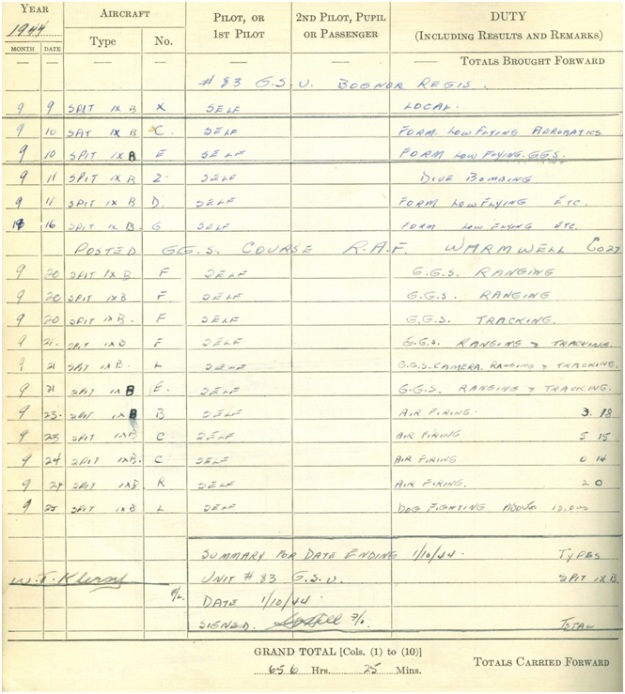 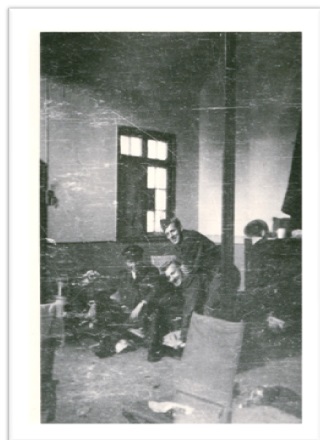 Next, in Part Two, a short history of No. 416 Squadron follows.

All the information you need to know will be on these first pages.

These are taken from Gordon McKenzie Hill’s logbook carefully scanned by Clarence Simonsen. 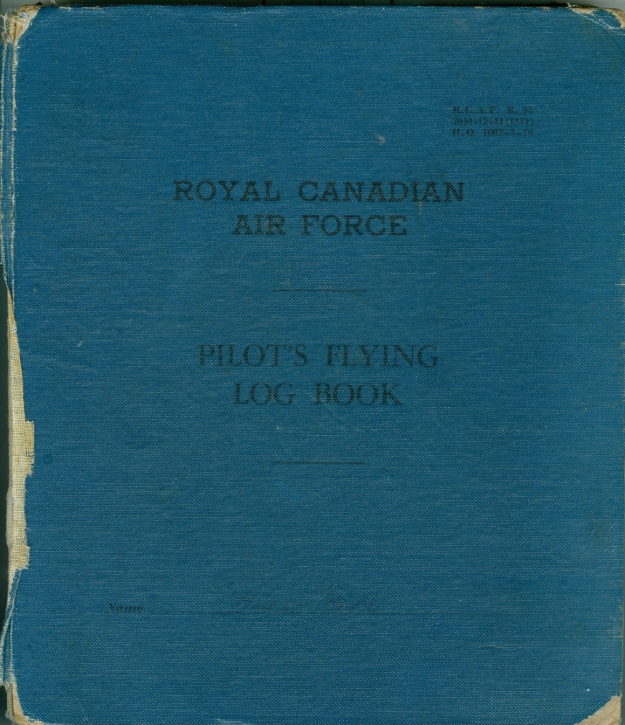 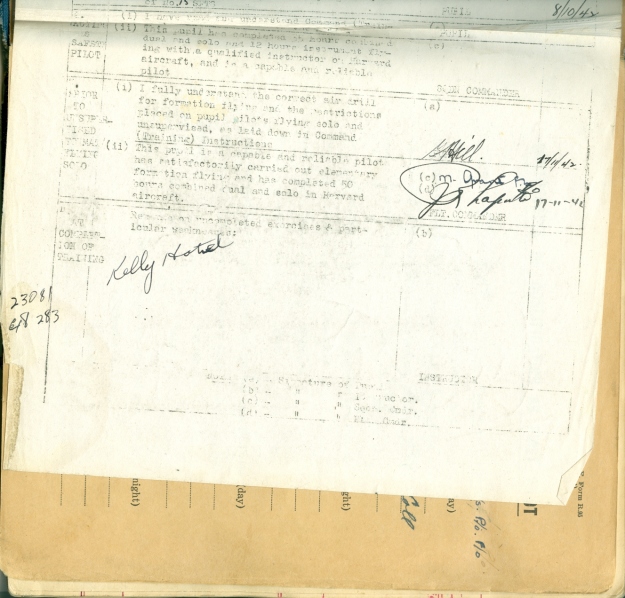 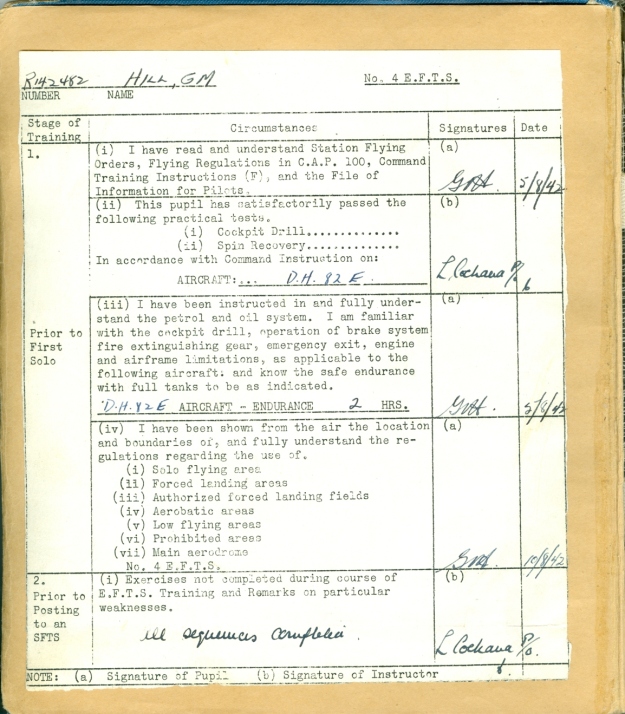 This is the first page of the logbook. Gordon Hill is taken on strength at No. 4 EFTS Windsor Mills, Quebec.

As always, I wonder what happened to the people whose names appear in a logbook.

What about Sergeant M. Cochand? 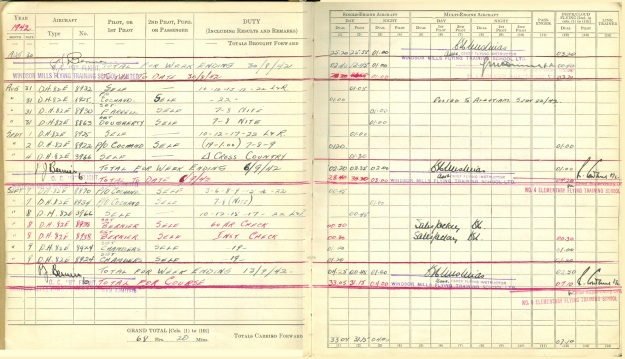 Tiger Moth #8922 was built at Downsview, Ontario in 1942. It saw service with No. 12 EFTS, Goderich, Ontario and No. 4 EFTS, Windsor Mills, Quebec until 1945, when it was sold to the Royal Canadian Air Force Association. The Tiger Moth was then stored for over 25 years. The Museum acquired the aircraft through George Neal, then a de Havilland Canada test pilot. The Tiger Moth was donated to the Canadian Warplane Heritage Museum by John Weir in 1973. A five year restoration program followed before the Tiger Moth returned to the skies once again.