The Making of a WWII RCAF Spitfire Pilot

Part Three – We are heading for Holland tomorrow…

As we left the Anson aircraft, I met a fellow pilot from Canada, F/O John McColl, and we began to talk about life at No. 133 Squadron, etc. He asks if I would like to join the squadron on a patrol, and I answered “Yes.” I dumped my gear in the orderly tent, climbed into Spitfire Mk. IXE “G”, serial ML415, and we took off for the front German lines at 16:02 hrs. The flight lasted one hour, saw 20 plus German 190s passing east above us at around 2,000 ft. and two jets, McColl fired but no results were seen. After landing, I checked directly into the pilots [Dutch house] quarters at 17:30 hrs. and my name was never recorded in the Daily Diary. That is how I joined No. 416 Squadron at Grave, Holland. On 4 October, I was assigned Spitfire DN-D, which I flew on most of the patrols that first month.

With the sound of an aircraft engine, Canadians had developed a twitch, the name was applied to the British steel helmets, appearing in Daily Diary 26 October 1944.

On 12 October 1944, a direct hit was received on the dispersal site, damaging six Spitfire aircraft, and killing five of the ground crew members who had been working on the fighters. 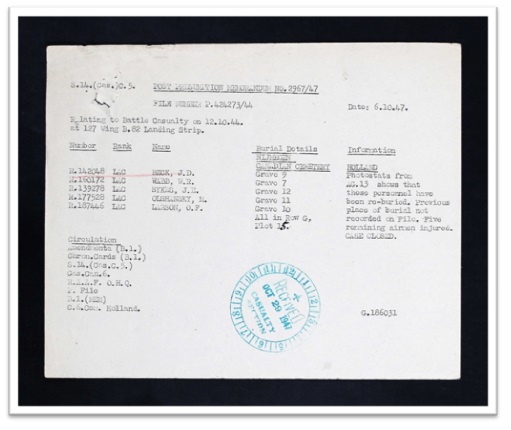 One of the five… 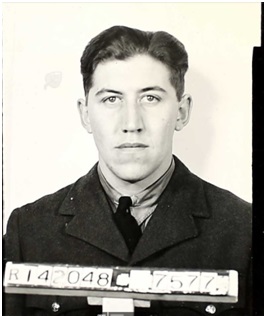 Should he be shot down in Holland and not be captured, these photos would allow the Dutch underground to print false official identification papers, to fool the German check-points. These are Gordon’s original photos.

The RCAF stay at Grave lasted 22 days and Gordon would fly 40 patrols until 19 October, sometimes three flights per day. From the 1st to 18th October 1944, they flew 458 sorties, damaged four German trains and left two vehicles in flames. Total pilots on strength were 24 Officers, and one NCO, eleven listed above, in yellow.

This is the first Supermarine Spitfire Mk. IXE image taken by pilot Hill at Grave, Holland, early October 1944. The pilots were instructed not to show code letters and most of all serial numbers of fighters in any photographs taken. Gordon cannot recall, but this might be his assigned Spitfire DN-D. This fighter was constructed with the British “c” Wing [extended] which has a much more pointed tip, compared to the normal standard “e” wing construction. This fighter also carried a rear fuselage band in light color, common to RAF units.

For protection from the German bombing, the 25 Canadian pilots were housed in a private home located some 30 miles north-west of the airfield, in the City of Ravenstein, Netherlands.

This became their new home for the next 22 days at Grave, Netherlands. The ground crews lived in tents on the base, and six would be killed from German attacks. The new Canadian pilots also became a major attraction to the local Dutch children, who are seen in many images taken by F/O Hill. Note pilot in second story window.

These two pilots had just arrived with No. 416, replacements along with F/O Gordon Hill. 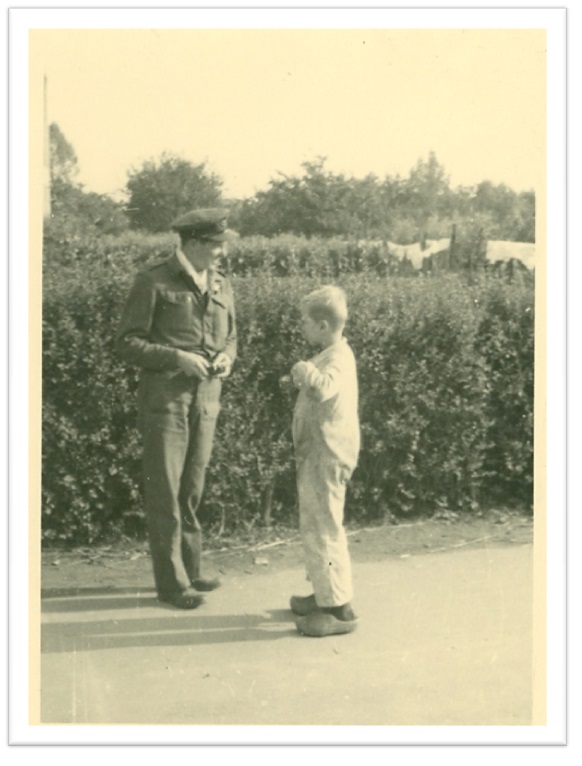 The tree line around the ex-German airfield contained hundreds of Luftwaffe bombs.

In early October 1944, F/O William “Bill” Bridgman [left] looking at this strange bomb. It is believed this was an unpowered German guided Fritz-X bomb, that reached an impact velocity near the speed of sound. 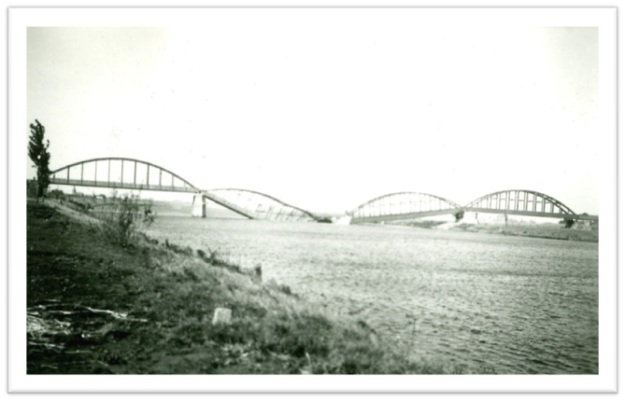 The railway bridge over Meuse River at Ravenstein, destroyed 10 May 1940, by Dutch engineers to prevent invading Germans from crossing into Netherlands. 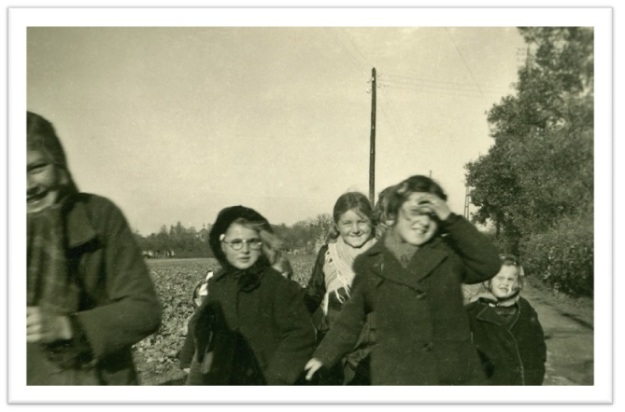 Formation of “A” flight passing over airfield Grave, Holland, October 44.

“A” Flight takes off Grave, Holland.

16 October 44, F/O Mush R. Sharun and F/O Gordon Hill [wearing his twitch hat] visit the area on the south bank of Waal River, just north of the Nijmegen bridge. The ground was covered with American Waco gliders used in Operation Market Garden invasion. Gliders used by the famous 82nd Airborne during their assault on this area, 17 September 1944. Germany was only six miles East from this drop zone. 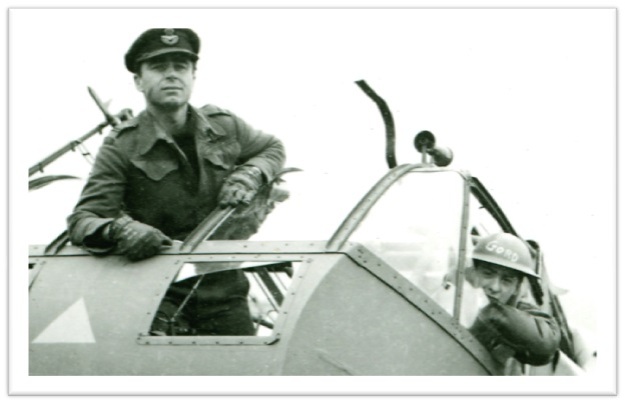 Gordon had flown his last operation from Grave, Holland, on 15 October, a high front line patrol at 20,000 feet. On the 19 October, the heavy winter rains came and flooded the airfield, all flights were cancelled. 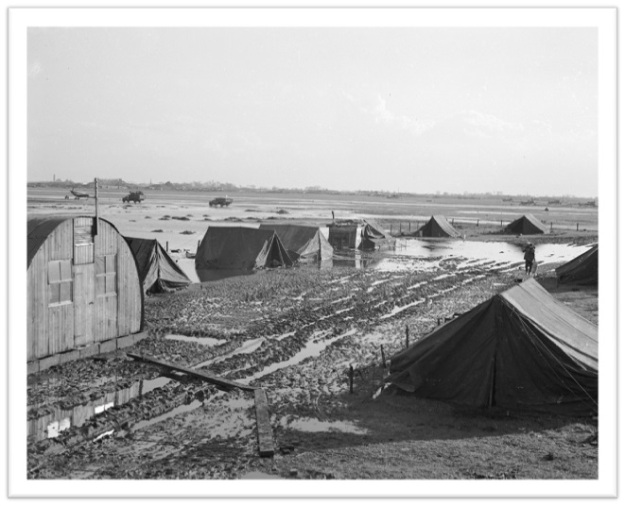 This image shows the conditions the ground crew lived and worked in at Grave. On 21 October, the squadron was ordered south to Brussels for a two-week rest, and the Spitfires departed, Hill flying DN-B. Flying out proved to be very dangerous as water was everywhere. Each Spitfire required four ground crew members, two on tail, and one on each wing, just to taxi for take-off. The take-off was conducted in three or four inches of water, and all aircraft departed safely.

No. 67 on the map is the location of Base 82/Grave, Holland, where No. 416 remained from 30 September until 21 October 1944. This base in Holland was flooded by heavy rain fall on 19 October and the Spitfire aircraft departed south on 21 October. The next day the squadron moved south to Brussels and Base 58/Melsbroek, a “castle” [No. 19 on map] and two weeks’ rest. This was the first break the squadron received in the past four months. No. 20 on map was Base 56, Evere, Belgium, where they moved to on 4 November 44.