In April 1943, Arthur Rudolph endorsed the use of S.S. forced labor in the production of the A4 [V2] rockets at Peenemunde.

In June 1943, the first prisoners began to arrive and four weeks later, 600 mostly French and Russians were hard at work assembling V2 production machinery [image below]. A few selected Soviet artists also worked in the rocket drafting room. These prisoners of war were house in an area called, [Trassenheide] which was located 2 miles south of the German residential housing estate [Karl–Hagen Siedlung] where 500 of the most brilliant German scientists and families lived. The Karl-Hagen Housing Estate was a model village completed October 1937.

The RAF raid on 17/18 August 1943, consisted of three waves of 596 bombers, the first was the most important, to catch the Germans asleep in the Karl-Hagen Estate and kill as many expert technical and scientific people as possible, including women and children. The Pathfinder aircraft missed their main target and marked the labor camp at Trassenheide, killing 555 of the 600 Polish and French prisoners of war. This mistaken target hit changed the course of the war and made possible the future of man in space and landing on the moon.

This research history is dedicated to the unknown names and forgotten foreign prisoners of war who died that night – 18 August 1943. Their unknown sacrifice changed the world we live in and formed the future of humans in space. 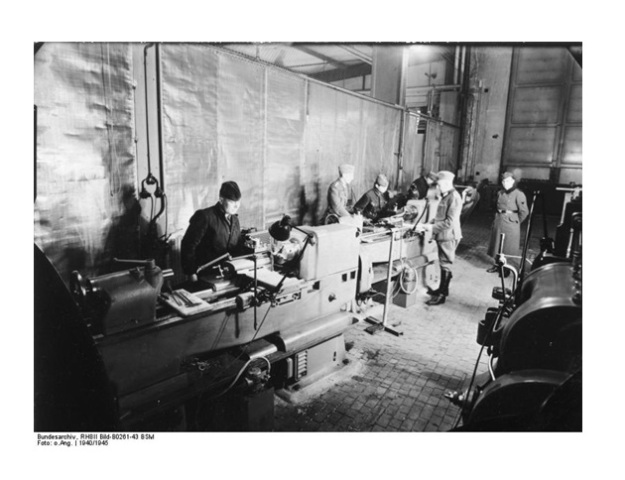 Soviet Prisoners of War, working in the production of A/4 rocket parts at Peenemunde.
German Federal Archives free domain

The date of this  picture  is unknown.

However the prisoners arrived at Peenemunde in June 1943 and the RAF attacked on 17 August 43. This was probably taken in that period of time and these three young Russian POWs would be killed in the bombing attack early 18 August 1943.