After fifteen amazing years, the German rocket research in Peenemünde came to a sudden end on 2 May 1945, when Wernher von Braun and his fellow technicians surrendered to the American Army. In the next eight months these top German scientists would experience extreme physical, mental, and psychological effects which I believe was expressed in their new ‘reborn’ rocket tail art.

In the construction of the base at Peenemünde, [August 1936 start] General Dornberger and von Braun had virtually spared no expense. Part of that reasoning was simple, if employees had the best of living and working conditions, they would also perform better on the job. The other reasoning was totally based on secrecy, and the site selection on heavily forested Usedom Island, located on the Baltic Sea coast was perfect. Usedom was first of all remote, separated to the south by Stettin Lagoon, to the west by the Peene River, and the Swina Channel to the east. The island was not connected to any major road and only three bridges allowed road and rail traffic to exit or enter. The administration buildings, housing settlement, workshops, rocket assembly and test stands were all widely separated over the well-planned eight mile peninsula, camouflaged among the many trees. The housing settlement was designed on a garden city concept and built just west of the Baltic white sand beach, only separated by a stand of pine trees. There were clubs for military officers and civilian workers, bakeries, butcher shop, grocery store, beauty salon, cafes, bookstore, school, tennis court, a large sports field, and four movie theatres. Peenemünde was a mix of paradise, an Army Camp, and a new social experiment for the top German rocket engineers and scientists. To all the employees, secrecy became the central fact of life and they soon became a secret society, located in a new secret world isolated from all of Nazi Germany. Military rank melted away and became secondary to professional technical qualifications. There were security regulations for everything, including even the spoken word. The major security object was to prevent any single German technician from learning the entire rocket operating system.

Vital technical drawings were held in one location, with a very limited and controlled employee access. All photos and drawings were top secret or stamped the highest priority “state secret.” Security forbids the use of any drawing, symbol, or insignia, thus preventing all employees from wearing any badge of pride or showing of their group achievement.

During the second A/4 launch on 13 June 1942, a tail art appeared on the rocket just before blast-off and this became routine for the next 32 known test rockets launches at Peenemünde from 13 June 42 to 17 August 1943. This secret art was only seen by a select few and each painting contained the launch number [V6, etc.] it also contained a mix of comic/political/female nude style tail art. German happy achievement related to space or the moon appears in eighteen paintings. Seven paintings contain political art directed against the Soviets, British, and Americans, including three directed at P.M Churchill. This good-luck, happy expression of rocket tail art was the scientific team’s way of expressing self-pride, a sense of belonging and group achievement. The art was allowed [by von Braun] for the simple fact it posed no threat to German security, since the average rocket burn was 60-70 seconds and then the A/4 crashed to earth or splashed-down in the Baltic Sea.

On the night of 17/18 August 1943, the RAF Bomber Command struck with a surprise attack on Peenemünde, the glory days were gone and mass production moved underground to the caves at Nordhausen. The Peenemünde employees had enjoyed such a peaceful life; it lulled everyone into a false sense of the real world at war in Germany. Now that this spell was broken, the rocket production would move, the secrecy of A/4 was known, and the rocket tail art disappeared. [The grandson of Gerd de Beek, recalls him telling how he was informed to stop painting his tail art] For the next eighteen months, further A/4 rocket testing would be conducted at Peenemünde but only one tail art is known to have been used in 1944, the 100th launch.

The official surrender of Wernher von Braun and his technicians to the American Army is dated 7 May 1945, and the Peenemünde secret research ended. Four months later, this sudden death of A/4 testing was quickly followed by its rebirth under control of the British and Americans. The British Government created “Operation Backfire” to evaluate the complete V-2 rocket assembly and then launch three rockets. The American Government soon realized that German rocket technology was fifteen years ahead of the world, and speed was the key element to obtaining it. The Americans had von Braun and his top rocket scientists, next came removing 341 train loads of V-2 components, including 100 V-2 rockets, from the soon to be Soviet occupation zone at the Mittelwerk underground factory. The Americans were still missing the 14 tons of central V-2 research records which von Braun had ordered hidden in an abandoned iron mine [British zone]. If Dr. von Braun had destroyed the original HAP-11 archive photo albums, the secret A/4 tail art would be lost and forgotten for all time. 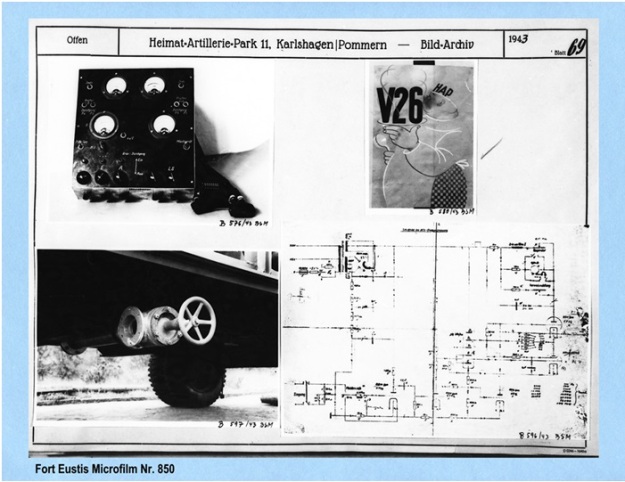 This is a microfilm copy made in United States [Fort Eustis] in 1946-47 showing test results of an A/4 launch, V26, plus the black and white image of the rocket tail art painted by de Beek. Each tail art image was used to identify the launch records in the Helmat-Artillerie-Park II binder photo album at Peenemünde.

After tricking a German officer into revealing the hidden document location, in the soon to be British occupation zone, the Americans trucked the 14 tons of documents to Paris on 27 May. The A/4 research documents were transported to the U.S. Army Base Fort Eustis in Maryland, where they were recorded on microfilm. This American smuggling act had taken place under the nose of the British, which caused some Allied conflict, until the U. S. government agreed to loan 79 of their new U.S. bound German technicians to the British operation “Backfire.” On 22 June 1945, General Eisenhower sanctioned the use of captured V-2 rockets to be test fired on the north German coast at Cuxhaven, Germany. Over 2,000 Canadian Engineers [airport construction] were dispatched to the site by the British to begin construction of the new rocket launch site.

When Major General Walter Dornberger was first informed he would be assisting the British he was very reluctant, but in the end cooperated. The British would soon arrest Dornberger for his war crimes and he would spend almost two years confined. American political pressure would have him released to U. S. custody and this story has been published many times. Below is his dejected British POW mug shot.

Almost all of the rocket scientists were horrified with the idea they would be turned over to the British control. On 22 July 1945, the British picked 79 [America bound] German technicians housed at Garmisch-Partenkirchen, were trucked to Cuxhaven, Germany. I am positive graphic artist Gerd de Beek was one of the selected engineers, due to the large amount of drawings the British required. The organization chart shows 367 German technicians and labor forces of 224 were used in the four test launches. Total 591 Germans.

This British study resulted in the most comprehensive evaluations and documentation [including drawings and photos] ever undertaken on the A/4 [V-2] rocket. The British were surprised to learn that no previous evaluation had been allowed at Peenemünde due to the strict top security regulations. This followed the German secrecy rule; no single technician should learn the entire rocket system. Gerd de Beek was an exception to this rule and for that reason was most important to the new American White Sands Space program. Wernher von Braun picked the two German draftsmen [technicians] who would document and complete the hundreds of drawings required by the British. I believe that Gerd de Beek was the man placed in charge of the overall drafting and his second in command was Max Ernest Novak, a draftsman but also the technician in charge of the important A/4 rocket assembly.

It is important to note that soon after Gerd de Beek arrived in New York on 16 November 1946, he was placed in charge of the American V-2 rocket assembly at White Sands, New Mexico. In 1949, de Beek was moved to the Redstone Arsenal at Huntsville, Alabama, and became head of NASA Assembly Engineering Branch in 1960.

Max Novak was possibly another expert on the A/4 rocket parts, how they all came together and operated during launch. His history is still unknown outside the tight German/American group in Huntsville, Alabamia. 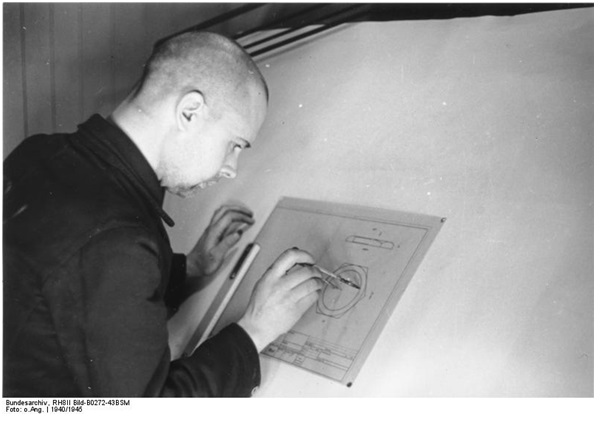 German Federal Archives image taken at Peenemünde in 1943. This Soviet POW is being used in the A/4 rocket drafting room. Is it possible Gerd de Beek and Max Novak worked together at Peenemünde, using Soviet POW’s with drafting skills?

This same procedure would be used at Cuxhaven, employing German POW’s from the labor force who processed art or drafting skills. The cover art on the memorandum book prepared for the British was drawn and signed Novak, and the question remains, who painted the new rocket tail art that appeared at Cuxhaven, Germany in October 1945?

Again I believe it was Gerd de Beek, who was the draftsman in charge, as he also had the free time to create and paint the new German A/4 captured rocket tail art. I also believe the four new tail art paintings created for the Cuxhaven launches contained a special meaning to the German scientists. [This has been fully explained in Chapter Eight]

While the British Army officers were in charge of the launch operation, it became the captured German Army scientists who were in total control. This Third Reich V-2 rocket missile was fifteen years ahead of the British scientists and the Germans knew this fact. The Germans could even control the time it took to assemble and launch a rocket. I believe this was done for the very first launch on 1 October 1945. This date was the thirteenth anniversary of Wernher von Braun joining the German Ordnance Office Rocket Program in Germany headed by his friend Walter Dornberger, who hired him. It was a special date shared by only the German rocket team but hidden to the British Army Officers.

This little German lady painted by de Beek never flew however I believe the art work had a connection to Wernher von Braun and his anniversary date of 1 October 1932.

The next rocket launch [third attempt] begins at 09:30 hrs. 2 October 1945, successfully launched at 14:41 hrs. This becomes the first A/4 launch observed by Allied personnel at close range.

This is the rocket that failed to fire twice on 1 October 45. It has new art with number “1”. The third and final rocket is launched on 15 October.

The topless lady with fruit?

The A/4 rocket art created for Cuxhaven contains four images, three are female, and two are nudes. I believe the three female images have a connection to the German lady – “Die Frau im Monde”, the lady in the moon.