No. 416 [Lynx] Fighter Squadron was formed at Peterhead, Scotland, 22 November 1941, the sixth RCAF fighter squadron formed overseas. They chose the image of a Canadian Lynx leaping in front of a large Maple Leaf, with motto – “Ad saltum paratus” [Ready for the Leap]. 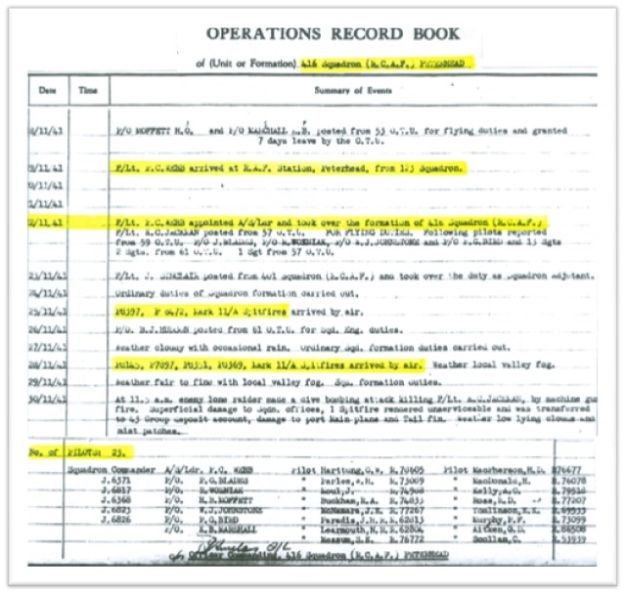 The original art creation came from AC1 Matthew Cecil Ferguson, an aero-frame mechanic who came to the squadron in early March 1942. Mat was born in England, then immigrated to Canada with his parents and grew up in Calgary, Alberta. He would become Canada’s most famous WWII nose artist and created three RCAF badges which were submitted to Chester of Herald in England. Two were officially approved, including the Lynx badge, authority King George VI, 16 November 1944.

Mat Ferguson arrived with No. 416 Squadron in the first week of March 1942, around the same time a new C.O. Squadron Leader L. V. Chadburn, DFC, took over the squadron. On 14 March, S/L Chadburn led “A” flight from Peterhead to Dyce, Aberdeen, Scotland. On the same date, “B” flight [Ground Train Party] moved from Peterhead to Montrose, leaving by train at 08:15 hrs, one officer and eighty other ranks. These are the orders published on 12 March 1942, listing Mat Ferguson as one of the ground crew mechanics. 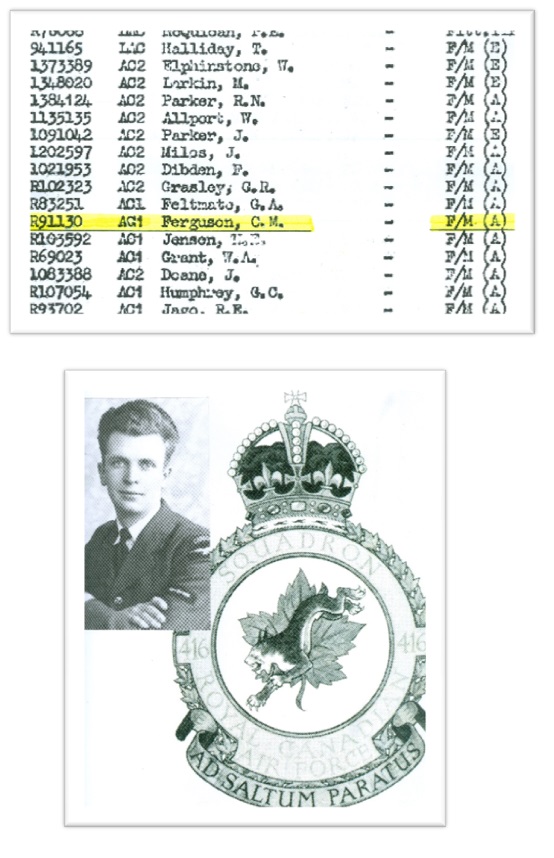 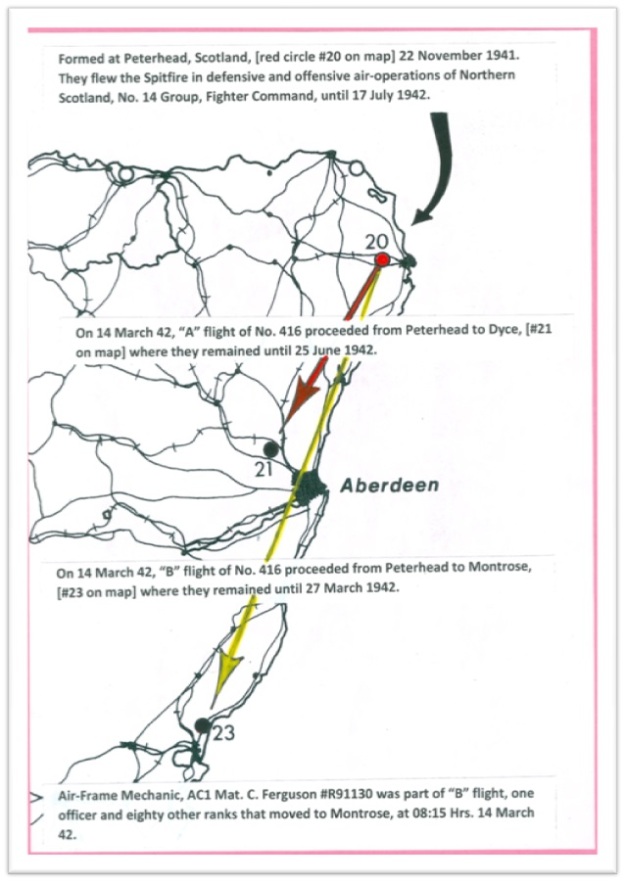 No. 416 Squadron “B” Flight, and Mat Ferguson, remained at Montrose, Scotland, until 27 March 1942, then moved back to home base at Peterhead on 28 March 1942. This photo [PL15079] was taken in late March at either Montrose or Peterhead, Scotland, showing S/L Lloyd V. Chadburn standing proudly in front of his Spitfire with new Lynx nose art. He flew Spitfire BL920 and BL932 during this period of time.

The nose art Lynx was a stencil created by Mat Ferguson and I believe this was the very first art showing of the squadron badge. Chadburn fully understood the importance of creating an identify for his new fighter squadron, and I’m positive worked with Ferguson to create this image.

Another very special event took place on 16 December 1942, when Lt. General McNaughton presented the squadron with a presentation Spitfire, from the Policemen of Canada, [Canadian Police Association]. The Spitfire nose art was painted by AC 1 Mat Ferguson.

Lynx Squadron flew Spitfire aircraft on defensive and then offensive air operations over England and later North-West Europe. In Scotland and England, they flew under No. 14 Group, Peterhead, Aberdeen, Scotland, No. 11 Group, Martlesham Heath, Suffolk, No. 12 Group, Canadian Wing, Wellington, Lincs., No. 11 Group Merston Sussex, and again No. 12 Group, Canadian Digby Wing at Wellington, Lincs. This part of their history can be found in some sixty pages of detailed Daily Operations, which can be confusing even to an historian. To make it simple, they flew as part of RCAF Fighter Command units of the R.A.F. in the Air Defence of Great Britain. On 12 February 1944, they came under Second Tactical Air Force, No. 83 [Composite] Group, No. 127 [RCAF] Wing, at Kenley, Surrey, and Tangmere, Sussex, until 15 June 1944.
On 16 June 1944, Lynx Squadron moved to ALG (Advanced Landing Ground) B.2, Bazenville, France, under R.A.F. H.Q. Allied Expeditionary Air Force, and flew in ground support of N-W Europe. On 28 August 1944, they moved to B.26 at Illiers l’Eveque, France, and B.68 Le Culot, Belgium, on 22 September 1944. The next move came on 30 September 1944, to B.82 Grave, Holland.

In early September 1944, British, Canadian, and American troops first entered the southern border of the Netherlands, just three months after the D-Day landings in Normandy. On 17 September, the Allies launched Operations Market Garden, a massive airborne assault on the Dutch town of Arnhem. This Arnhem attack failed and the Allied advance was stopped, keeping most of the Netherlands under German control. Canadian forces were now given the deadly task of liberating the Netherlands from Nazi Germany occupation.
After three years of flying defensive and offensive operations against the German forces, No. 416 [Lynx] would now begin offensive air operations in support of Canadian ground forces in the Netherlands. This assault on the Netherlands is very complex and can be found on may Websites, books, and movies. From October 1944 to April 1945, the Canadian First Army fought the Germans on the Scheldt estuary, opened the port of Antwerp and cleared the north and western Netherlands of the German Nazis. Today, Canada is fondly remembered by the Dutch people for ending their long oppression under the Nazis. On 30 September 1944, No. 416 Squadron arrived in the middle of the battle, just six miles from Germany, at an airfield called Base 82, Grave, Netherlands. A new Spitfire pilot Gordon Hill had just arrived with Lynx Squadron and captured on film much of the following history. Most of these images have never been shown before and it is possible a number of the Dutch children are still living today. 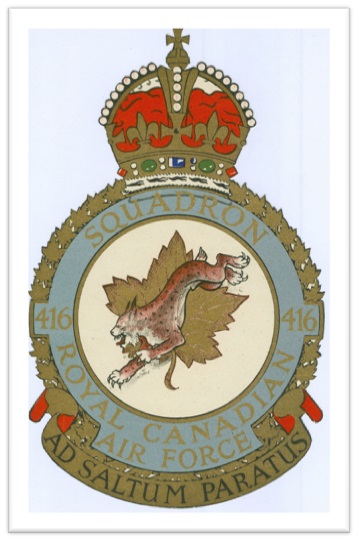 This badge was officially approved on 16 November 1944, recorded in Daily Diary.

We are heading for Holland tomorrow… 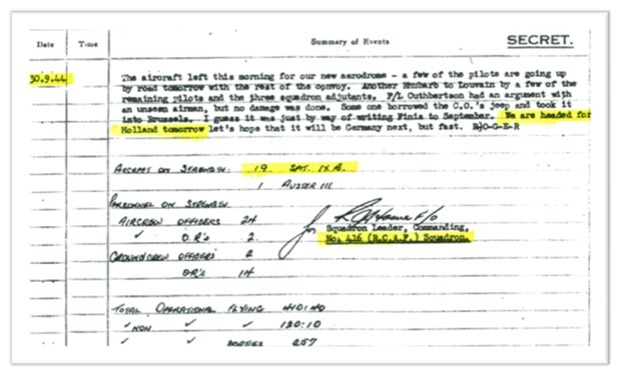